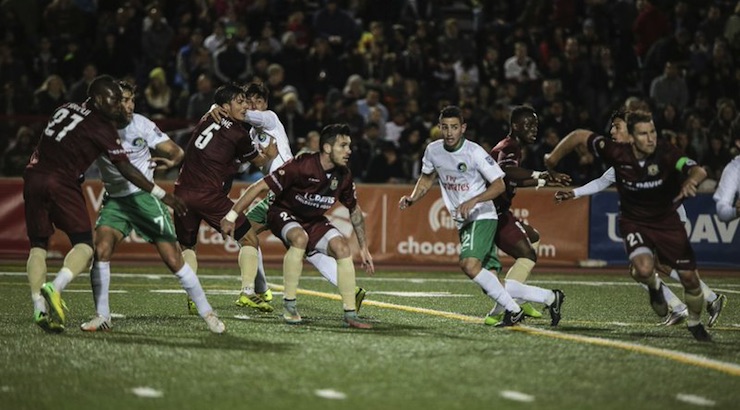 The Cosmos tangle with the Republic in a 2015 preseason match (Photo: Sacramento Repubic)

With a New York Cosmos friendly at the San Jose Earthquakes already announced, the club expanded its preseason with two more friendlies.

“We are delighted to add another two fixtures to our preseason campaign,” said New York Cosmos Head Coach Giovanni Savarese.

The tour will now begin against Armenian first-division club Ararat Yerevan FC at Citrus College Stadium in Glendora, about 25 miles outside of Los Angeles, on Saturday, February 20th.

Considered the most popular club in Armenia, Yerevan have claimed two league titles and seven Armenian cups. They placed last in the league last season after a row of results that saw them lose only one game on the road, but win only two games at home all season. The results and other factors led to four coaching changes across the year with Varuzhan Sukiasyan taking the helm. Sukiasyan currently also heads up the Armenian national squad.

With Assistant Coach Alecko Eskandarian and midfielder Hagop Chirishian both being of Armenian descent, it’s understandable that the game is eagerly anticipated.

“I’m very excited about the fixture against Ararat,” said Eskandarian. “Soccer is a big part of Armenian culture so this game will no doubt have a lot of passion as well as support from the Armenian community.”