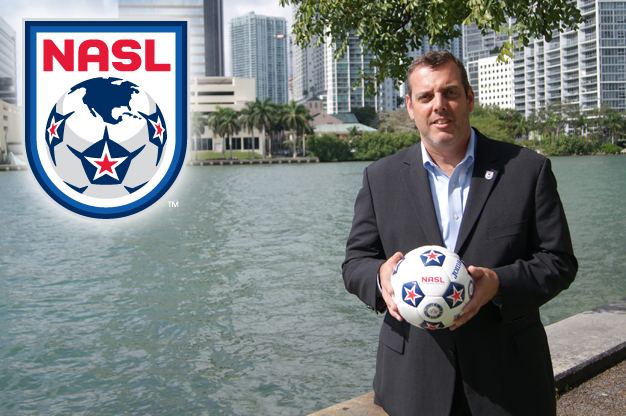 Last week I had a chance to have a one on one with NASL Commissioner Bill Peterson following Ottawa Fury’s 0-0 draw with the New York Cosmos, and we talked about the USSF/CSA, Canadian Expansion, NASL ownership, plus promotion and relegation.

Peterson came on a night when Fury put forth a strong effort against a stout Cosmos team in front of a loud and passionate home crowd.  “Well, I would say I’m impressed, but I think we knew they would do well.  We knew it was a good marketplace, we knew it was a good ownership group, they hired a great coach and technical staff.  Everyone has been very focused and being better.”

When asked about Canadian expansion Peterson simply said they weren’t looking into anything just yet and it is not something they have in the works.  When I asked if he was worried about the rumours of a Canadian Division One league of its own popping up and taking away potential NASL market places, he replied “I don’t know where that stands. I can’t quite figure who is behind that or where it stands, so I am not sure if it is anything more than just a rumour.  We have always said that we will look out for the best interests of soccer in this part of the world; if we play a role in that, then fantastic.  Even if it’s something in the shorter term, and in the longer term there is a separate Canadian league, that would fantastic, but I don’t know where all that (Canadian league) is and we will continue to focus on what we do.”

When asked about how he and the league view the USSF ruling that Canadian players count as international players on the American team’s rosters, Peterson said “They (USSF) make the decision, not us.  We said that, in a way, it’s not our issue. We are a North American league so we are supportive of what the CSA is trying to do, we understand the advantages, and we would like to see them develop players and strengthen their national team and everything else, but we don’t really seem to have a say in that.   We will see what happens, but it is really a federation issue, and they are going to have to iron that out.  But we definitely see their (CSA) view point, and we are supportive of it”

The Carolina Railhawks have been seeking a new ownership; however, when asked about the club’s situation, Peterson said they don’t have anything to announce yet.  “We are in some discussions, there’s people taking a look at it, we are meeting with them as part of the process.  It’s always a long process, and it’s quite a commitment for someone to come in and own one of our teams right now.  They’ve got a great organization, on the field and off their field, and we are confident something positive will happen there.”

When asked if there was any ground being made on ownership of the Atlanta Silverbacks, a club currently owned and run by the NASL, Bill said “No nothing there on that either.  That’s one that’s probably just a little more concerning.  We have had some conversations recently with some groups that want to keep the team in Atlanta.  There are a lot of people who would like to come in and take it somewhere else, but thats not our priority.  We are going to keep pressing and keep talking to people.”

Finally, I was able to talk to Peterson about the news that had stirred conversation in recent weeks about the NPSL and NASL getting together for a promotion relegation system. Peterson said “I think that got a little bit taken out of context.  Do we believe in it?  Yes.  Does it need to happen?  Yes.  Will it happen with the NPSL?  No, not in its current state, they are a different league.  We are very supportive of their league, we want to help them, but it’s not a starting point.  That’s a league that was structured for amateurs, they play different seasons, something needs to be more tailored and fit to what we are doing.”