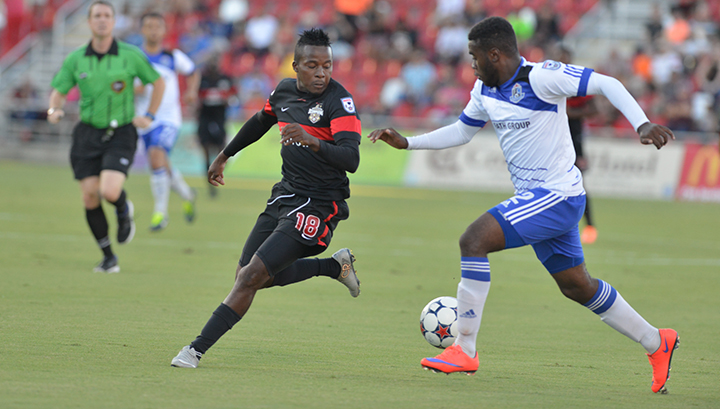 -In their second and last meeting of the Fall Season, the Scorpions sought revenge after the Eddies laid a 4-0 beatdown in the first game of the season. Despite having home field advantage this time around, San Antonio coughed up the lead twice in the match, settling for the 2-2 draw. The two teams ended their 2015 regular combined season 1-1-1.

-FC Edmonton maintained their impressive undefeated run in the early Fall Season. After going down a goal in the first and second halves, the Eddies persevered and kept themselves in the match, coming up with key equalizers to earn another crucial point on the road. FC Edmonton now sits definitively as top dog in the standings with five points.

Michael Nonni – A defender by trade, the Canadian native showed his versatility as Coach Miller utilized him in the right wing, filling in gaps due to injuries and international duty for the Gold Cup. He made a significant impact, registering his first goal of the season and providing Edmonton’s first equalizer with a tap-in after a cross from teammate Johann Smith’s into the box. He made another play by providing the assist to Cristian Raudales’ 71st minute equalizer.

Billy Forbes – The San Antonio left winger played a key role in each of the Scorpions’ goals, providing both assists and retaining his spot as 2015 Assist Leader. His second assist was a thing of beauty, torching Edmonton defender, Albert Watson, and dishing it expertly across the goal to Cristian Raudales for the clean finish.

Matt VanOekel  – The Eddies’ keeper made two impressive first half saves from shots at close range, and VanOekel made another save on a header from Omar Cummings late in the second half to maintain the draw.

FC Edmonton’s Defense – SURPRISE! The Eddies’ backline continues to show lack of discipline and situational awareness. Both of San Antonio’s goals resulted from a lack of proper marking and lack of pressure as the Scorpions’ pushed their attack in front of the goal. Look at the highlights, specifically at Omar Cummings’ goal in the 17th minute. Why is there so much open real estate between Cummings and VanOekel!? Raudales’ goal is no better as he is free to make the run on Edmonton’s left side with no mark.

Mea Culpa. At the beginning of the Fall Season, I wrote an article on the Eddies’ prospects for the upcoming season. In it, I stated that there was no way that Edmonton could significantly improve from 9th on the tables in a horrid Spring Season. So far, I’ve been proven wrong. The Eddies have come out strong, are número uno in the Fall Season tables, and are 8th for the combined season, where I had initially predicted them to end up at after the season concludes. Now the question is: can they keep this up? I predict no, they can’t (but they will still improve in the combined standings). Why? Because Defense. Wins. Championships.