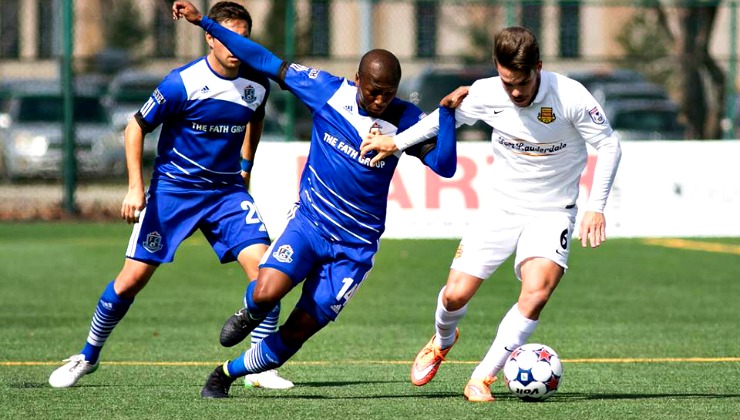 -Eddies look to continue momentum from a 4-0 win against San Antonio on the road to earn first back-to-back wins of 2015.

-Combination of injuries and international duty cause concerns with depth for FC Edmonton.

-Returning head coach Günter Kronsteiner aims to bring back some magic from his prior coaching stint with the Strikers during the 2013-2014 season, leading the team to the NASL Soccer Bowl Finals before falling short against San Antonio. – FC Edmonton’s midfield – Acknowledging no expected changes in tactics from San Antonio, can the Eddies’ midfield successfully utilize its high pressure strategy against the Strikers’ 4-4-2 formation?

– Sadi Jalali – After strong play against San Antonio in Week 1, expect Coach Miller to rely on Jalali to spearhead the FC Edmonton attack as the lone striker up top.

– Jose Angulo – Coming off a one-game suspension, expect the forward to come out of the gates firing on all cylinders.

– Matt Van Oekel – Edmonton’s netminder has had a bungle filled Spring. Minnesota fans will know he’s capable of spectacular saves as well. Which Van Oekel shows up, viewers will enjoy the show.

– Lance Laing – Week 1’s NASL Player of the Week and the current 2015 NASL scoring leader is out on international duty for Jamaica in the Gold Cup.

– FC Edmonton’s Defense – The Eddies’ have what is considered the worst defense in the league.

– James Marcelin – Similar to Laing for the Eddies’, Marcelin is off on international duty for Haiti in the Gold Cup.