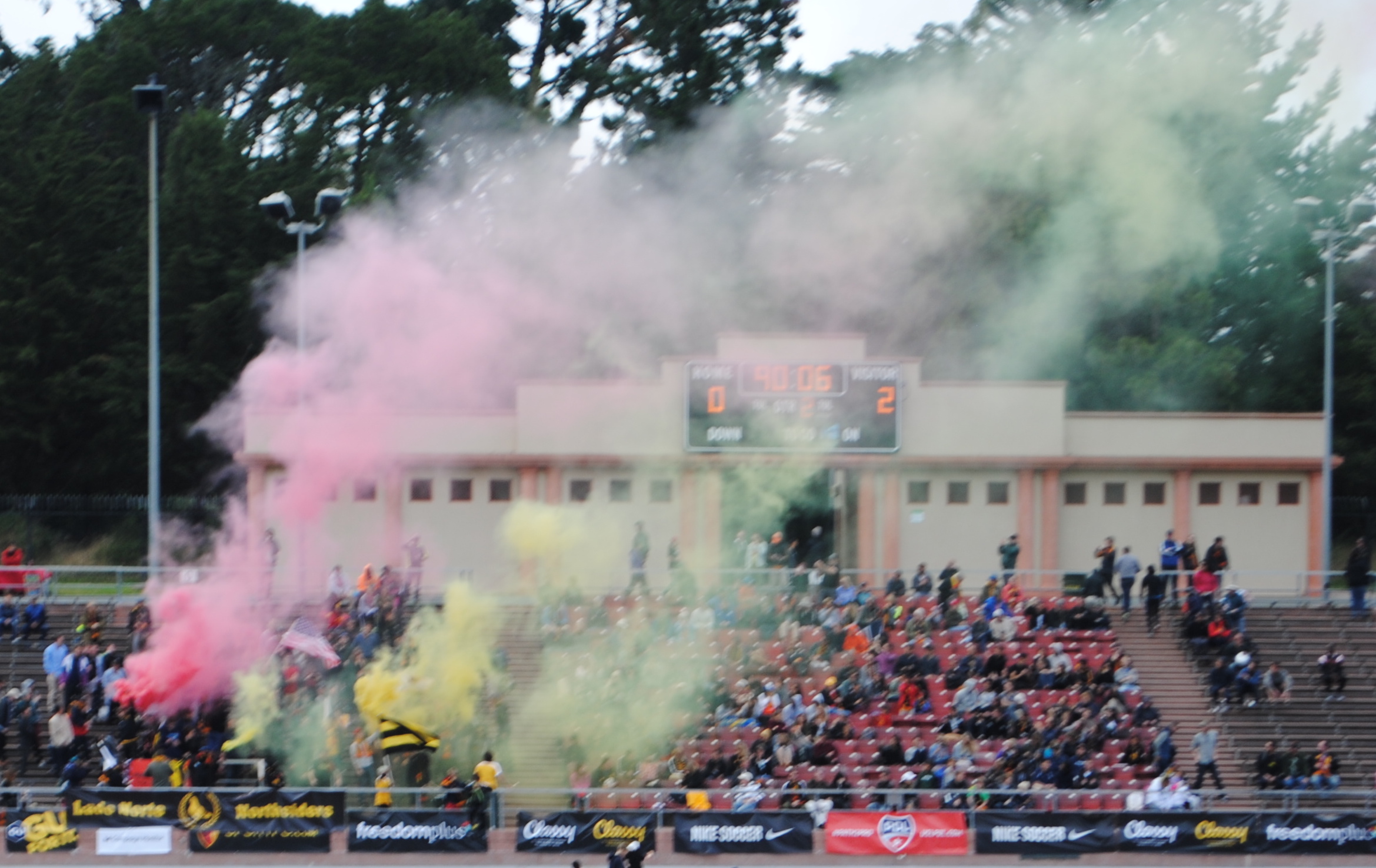 SF City FC welcomed a new PDL rival, the Las Vegas Mobsters, to Kezar Stadium in their home opener. Some fans were calling this arguably the biggest match in club history. Founded in 2001, SF City FC was a long time member of the San Francisco Soccer Football League, the oldest running soccer league in the United States, but now play in the 4th tier Professional Development League.

In 2014, SF City began work on creating a Supporter owned model similar to the 50 plus 1 rule used in the German soccer leagues. On Saturday, they opened the gates to their historic stadium, former home of the 49ers and on the edge of Golden Gate Park, for the first time as members of the PDL in the 4th tier of the US Soccer pyramid.

The game kicked off at 3 pm on June 4th in classic San Francisco spring weather, mid 60’s with fog and just a touch of sun trying to seep through the clouds. But the game is not the focus of my article. I want to tell you about their supporters. Because as we all know, soccer is nothing without fans.

SF City’s main supporters group is known as the Northsiders, or Lado Norte, because they sit on the north side of Kezar Stadium. The group is made up of men and women of various ages and ethnicities, encompassing the diversity of the city. As passionate as they are for their club, they are just as passionate about their community and playing soccer themselves.

Members of the Northsiders participated in a charity soccer tournament in the morning of the match, in which they raised more money than another team that participated. They went all the way to the final of the tournament before falling in the title match. Probably the most special part of the charity tournament is the fact that the head coach of the team, Paddy Coyne, showed up to support his supporters group in the charity match (he even took the photo above). In how many other clubs in the world would the manager show up to watch his fans play essentially pick up soccer just hours before his own match? It really shows the connectivity in the club.

The game kicked off with the Northsiders in fine voice. Within seconds, City was down 1-0. This got an immediate response from the City faithful as they began to sing: “We love you City, we do.” Unlike most times the road team scores within seconds, the fans did not go silent. They got louder.

The support the Northsiders give is not something new to soccer, but they always give it their own twist. They sing about their stadium and their pub, and not just their team. This is all part of their identity. They also change all of the standard soccer chants just slightly to give them a distinctly SF flair. Like when they sing: “When the FOG goes rolling in.” They also sing about specific players, something done a lot around the world, but much less so in the United States. For example, they sing: “We all dream of a team of Barry McCabes.” This is a song for their right back and cult hero of sorts.

They don’t only use traditional soccer songs; they have incorporated some of today’s pop songs with changed lyrics into their support. For example, they sing “Firework” by Katie Perry, reworked for soccer purposes. Not only are their songs creative, their heckling is more creative than most and specific to the team they are playing. For example, they were yelling “get your own water,” referring to the fact that Las Vegas water comes from Northern California.

Heckling the referee is also common from the Northsiders, with chants like, “We disagree with the smurphy referee,” because the refs where in blue, and  “It’s when the ball is played,” to explain the rules to the linesmen who made an offsides call with which they disagreed. At  halftime, they even cheered the groundskeeper who they know and have made part of the City family. Following the end of the half, the Northsiders’ section displayed a magnificent tifo, as good as any you’ll find in the rest of the 4th tier of US Soccer, and better than even some MLS supporters groups. And as the game ended, there was the classic, colorful smoke.

The energy these fans bring to the team is evident. The City players where playing aggressive and hard to the final whistle, because they were not just playing for themselves. They continued to go in with hard challenges and high pressure till the end of the game, even being down 2-0. It just goes to show the importance of fans in the effort level of the team. If there were not fans still singing, it would have been a lot easier for the players to take their foot off the pedal, much like how USMNT just stop playing against Columbia in the Copa America Opener.

The coolest thing I saw from the supporters all day was actually post game. After applauding their players and singing right through the final whistle, some Northsiders cleaned up all the trash in their section, because it is their second home and they take pride in their stadium as members of the club.

While there is a phenomenal supporters group leading the way for the clubs fans, the fanbase still has plenty of growing to do, which will take time. I was a little surprised at the lack of turnout. While the reported official payed attendance was 1,425, the actual attendance in seats was less. It was a fantastic turnout for 4th tier soccer in the US, don’t get me wrong, but San Fransisco is a major city with a lot more soccer fans than that. SF has no other current team in any league higher than the 4th tier; as well, SF City FC has an inviting membership model and friendly supporters. So where are all the Bay Area soccer fans? The reported attendance on the same day for the Burlingame Dragons, a PDL team in the same conference as SF City in San Mateo California (less than 20 miles south) was 4,000 at their home opener (payed reported official attendance). I was disappointed in the San Francisco sports community’s turnout, just weeks after a similar grassroots team in Detroit City FC reported close to 8,000 in their 4th division home opener. I was expecting at least 2,000 in Kezar on Saturday afternoon.

My disappointment is with the Bay Area Soccer community, and my perception of the growth of US soccer being put in check. If a well-run club in a beautiful stadium on a lovely Saturday afternoon in one of the world’s great cities can’t draw fans for soccer, maybe the growth of soccer in this country isn’t happening nearly as fast as we all think. But with the continued dedication and hard work of groups like the Northisiders, this growth will hopefully continue to progress faster and sooner.