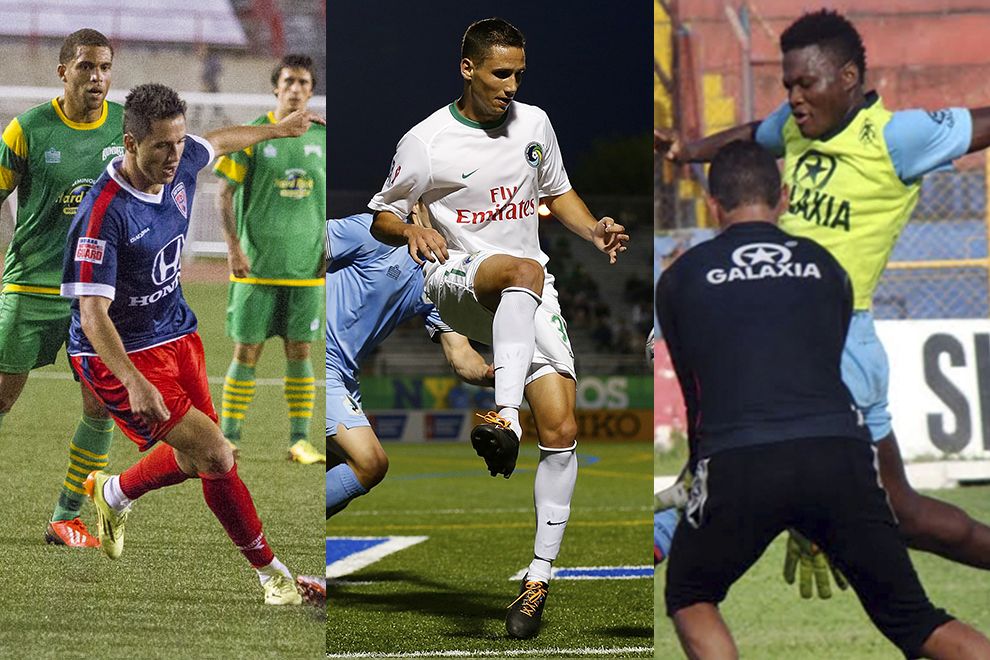 In the game of mid-season reinforcement, the Silverbacks plan to make a strong statement with 3 new attacking acquisitions.

Midfield Press has learned from reliable sources the Atlanta Silverbacks will shortly announce the signings of three attacking players: Award winning Brazilian twins Pedro & Paulo Mendes and 2014 CONCACAF Champions League veteran Mohamed (Kevin) Issahaku. The sources spoke on a condition of anonymity as the players have not been officially announced yet.

NASL fans will recognize forward Pedro as the winner of the 2013 NASL Goal of the Year and his midfielder brother Paulo as a member of the 2013 Soccer Bowl winning New York Cosmos side. Both brothers are also Atlanta Silverbacks returnees. Kevin Issahaku started for El Salvadoran club C.D. Fas in both their games against the New York Red Bulls in the 2014 CONCACAF Champions League Group Stage.

At 25 both Mendes brothers have progressively climbed the US Soccer pyramid, starting as amateurs with the DV8 Defenders of the USASA and Rhode Island Reds of the NPSL. They were members of the legendary Cal FC amateur squad (coached by Eric Wynalda) that made a fairytale run in the 2012 US Open Cup. Both brothers played two games each in a campaign that saw Cal FC pull off massive upsets against USL PRO’s Wilmington Hammerheads and MLS’ Portland Timbers. Both were brought into the Silverbacks squad midway through 2012 when Wynalda was given that team’s interim coach position.

Pedro remained with Atlanta for 2013 while Paulo was signed by the New York Cosmos in June 2013. The choices would prove prophetic. Pedro’s team picked up the 2013 NASL Spring Championship while Paulo’s earned the Fall title that year. The 2013 NASL Soccer Bowl marked the first time the brothers had played against one another competitively on the same pitch and both went 90 minutes for their respective squads. While Paulo’s Cosmos picked up the Soccer Bowl, Pedro was left the consolation prize of the season’s best goal:

After scoring 12 goals during his time in Atlanta, Pedro moved on to Indy Eleven for their 2014 expansion season while Paulo chose to remain with the Cosmos. After 456 minutes in 14 games played and no goals scored, Pedro was transferred to Minnesota United FC in August where he was unable to break into the a crowded lineup. Paulo left the Cosmos in July 2014 and signed with Atlanta between September 2014 and the end of the season. Both brothers found themselves free agents at the conclusion of the 2014 season.

A return to Atlanta represents a return to familiar surroundings for the Mendes twins but not so for Kevin Issahaku. The Ghanaian spent 2015 with El Salvador’s C.D. Fas. He was on the pitch for both games Fas played against the New York Red Bulls in the 2014 CONCACAF Champions League Group stage. Both Fas and the Red Bulls were eliminated from the tournament in a group that saw the Montreal Impact progress. In all, Issahaku has played 495 minutes in 11 games for CD Fas, scoring once.

When asked for comment, the Atlanta Silverbacks issued the following statement to Midfield Press:

“After our Spring Season, the coaching staff had to take some time to see what changes could be made. We are not dead in the playoff hunt and our goal is to make it into the NASL Championship. With ground to make up in the Fall Season, the Club is looking at different ways to get better, and player moves are a part of that. We can’t speak toward the specifics of who right now, but we are always striving to improve.”

In head coach Gary Smith Atlanta has an experienced professional who knows first hand how to put together a cup winning squad. With the acquisition of Kimura and the Mendes twins, he gains 3 players who have also had experience in a successful trophy run. Issahaku brings with him experience playing in North America’s biggest club tournament. All told, Atlanta is making a strong statement about their ambitions; They do not plan to be complacent in the 2015 Fall Season.