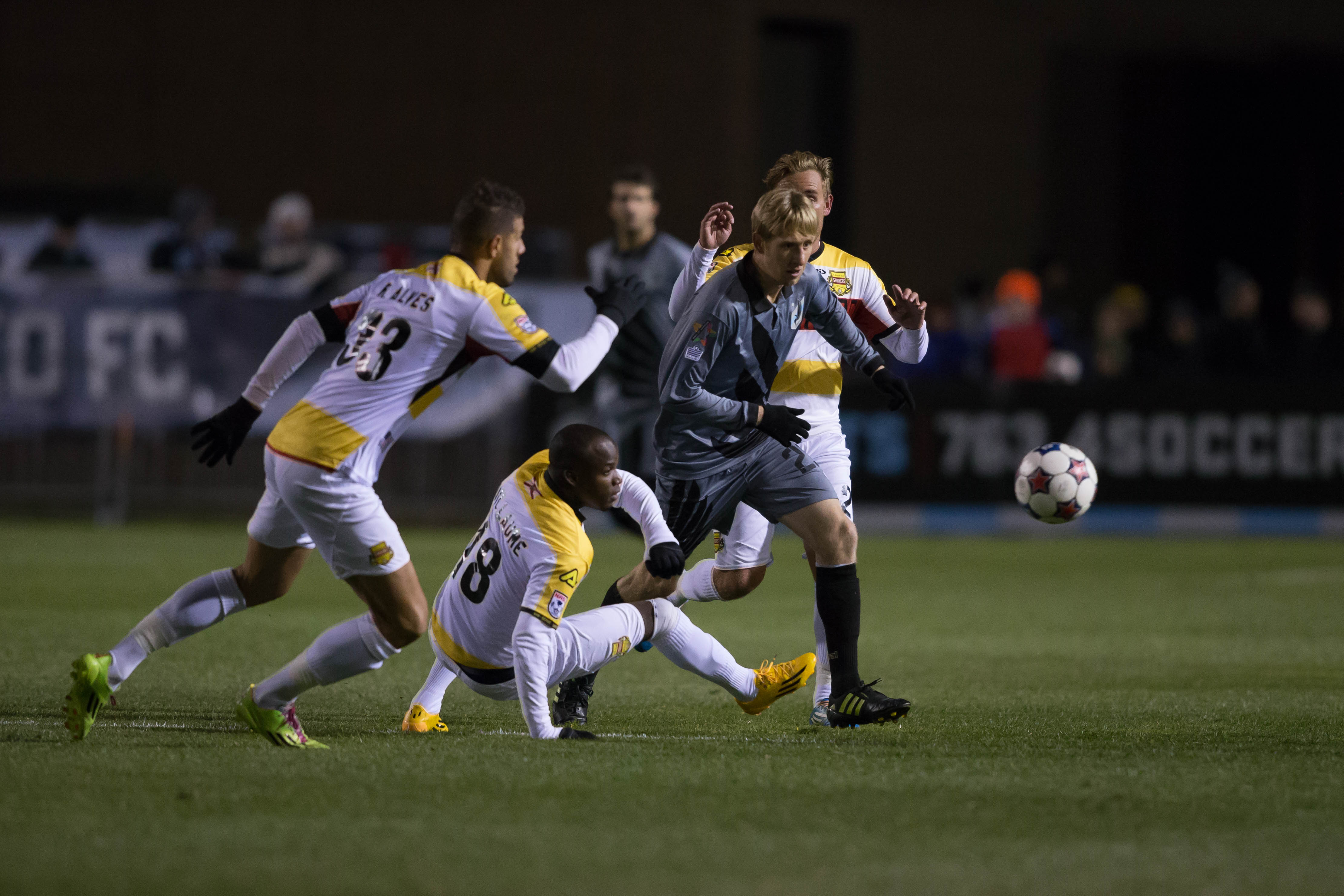 Minnesota United FC finished the 2014 season at the top of the NASL combined table but with precious little to show for it in terms of silverware. After picking up the Spring Championship, the longer Fall season was thrown away in the final games by a tired squad and the Soccer Bowl was snatched from within reach by semi-final referee Fotis Bazakos’ decision to stick to PRO’s head-scratchingly ludicrous (and now modified) interpretation of the offside rule. Despite ending 2014 on a low note, United have done a lot this preseason to inspire confidence going into 2015.

Last winter Minnesota soccer fans on Reddit invented the “#PANIC” meme to describe the uncertainty felt when waiting months for the team to announce signings. The 2015 preseason offered few chances to use the trope however, as signings came fast and in the form of players with unquestionable records. Most recent signing Geison Moura is arguably the weakest new arrival and even he played exceptionally well in the Singaporean league as a forward last year.

To begin their preseason United first took a sojourn to Arizona which allowed to them play the Seattle Sounders, Sporting KC and Indy Eleven. They then flew to Brazil for 2 weeks of training punctuated by 4 scrimmages against brazilian teams including 1st division squads Vasco da Gama and Botafogo. Much like their 2014 pre-season trip to England, United brass hope that the money spent to allow the team to train at CT João Havelange outside Rio will have produced a cohesive squad that are well acquainted to one another. Banishing 2013’s locker room issues was a key part of the improvement United showed in 2014. The trip to the country so many of United’s players call home will have been an attempt to maintain the locker room harmony for the year to come.

It’s also impossible to talk about United’s preseason without at least mentioning the team’s announcement as MLS’ 23rd expansion franchise, set to begin play in either 2017 or 2018 (LAFC’s arrival will dictate the year). For 2015, the only impact of this announcement is likely to be the larger crowds the team will bring to the National Sports Center; Team staff have remarked that sales of season tickets are up following Don Garber’s visit to Target Field. United’s supporters group, the Dark Clouds have adopted the slogan ‘Be Here Now’ on their scarves as a call to support the team today, here, in the NASL as opposed to focusing too much on what the future in a higher league holds.

Over the winter United’s veteran keeper (and second longest serving player) Matt Van Oekel chose to leave for FC Edmonton this winter leaving behind his backup of 3 seasons Mitch Hildebrant and untested 3rd choice Andrew Fontein. Hildebrandt saw significant minutes in 2014 due to an injury Van Oekel sustained and a strong (if ultimately fruitless) performance at Sporting Kansas City was illustrative of his success as a starter. That game, like Mitch’s starting pot was lost thanks to an unfortunate red card. With Van Oekel’s departure for snowier pastures, a new goalie signing was inevitable this winter, the only question being whether it would be a backup for Hildebrandt or a new starter. The team chose the latter.

Enter Cameroonian international Sammy N’Djock who, while younger than Hildebrandt, has played more competitive minutes and at a higher level across the French and Turkish leagues. He also has 3 international caps for Cameroon and was that country’s 3rd choice at the 2014 FIFA World Cup. N’Djock can play the role of a sweeper keeper and United has experimented with this during the preseason. As well as Hildebrandt has acquitted himself, N’Djock’s superior pedigree will be hard for coach Manny Lagos to ignore when selecting which of the two starts.

Arguably the weakest area of United’s 2014 squad remains the biggest concern moving into 2015. United have picked up no new defensive players and the entire 2014 back line returns for this year. If the starting lineup remains unchanged, Veteran Brazilians Cristiano Dias (now United’s 2nd longest serving player) and Tiago Calvano are the likely to play at center back while Kevin Venegas and Justin Davis will be put on as fullbacks on the left and right respectively. Dias and Calvano made their fair share of blunders in 2014 with the former conceding the red card that knocked United out of the US Open Cup.

The potential wild card is whether one or the other might be replaced by Aaron Pitchkolan in the starting lineup. Given United’s stacked midfield and lack of defensive reinforcement, it’s far more likely United captain Pitchkolan will play in the back rather than the midfield role he’s usually been assigned since arriving in Minnesota. In either role, he is no longer a lock for starting as he was last year.

Injuries in the defense are likely the biggest possible risk to this squad and we shouldn’t be surprised to see United seek out a signing in that area as the season goes on. At the moment Minnesota veteran Brian Kallman is the only strong defensive substitute available. His younger brother Brent needs more minutes before he can be considered a viable option while Tyler Polak who only saw action in 3 matches last year remains an unknown quantity.

United has a fearsome depth of options when it comes to the midfield and attack. This makes it very hard to predict who will be asked to lace up for the start. The only player who’s odds to start are better than the house’s is Miguel Ibarra. With starting minutes for the USMNT now on his resume right above ‘2014 NASL Golden Ball’, the only way a healthy Ibarra isn’t a starter is if he leaves the club mid-season.

United’s strike force is headed by two NASL Golden Boot winners: Christian Ramirez (2014) and Pablo Campos (2012). Campos is the veteran and it was his preseason injury last year that promoted then relative unknown Ramirez to the starting spot. The question of whether they will be played together or which one will start has been asked since early last season and the answer still remains a mystery. Coach Manny Lagos has shown a willingness to put them on the pitch together during preseason games and on one such occasion they worked together to score a spectacular goal. Ramirez has notably not scored in the preseason which seems out of character.

It’s scary to consider that Ibarra, Campos and Ramirez aren’t necessarily the most talented players in the attack either. New acquisition Ibson has UEFA Champions League experience and is extremely well regarded in his native Brazil. It’s hard to imagine United will have paid his likely hefty wages to have him sit on the bench. A creative mid, he will likely be started toward the center while coach Manny Lagos continues to push Ibarra off to the wing, a position he also plays for the USMNT.

Beyond those 4 players however, things get murkier. Veteran Journeyman Jonny Steele and USL PRO player of the year JC Banks have shown signs of attacking potency in the preseason friendlies which will make them hard to ignore. Juliano Vincentini and Greg Jordan both had positive 2014 seasons in defensive midfield roles. Picking between the 4 will be difficult and bruised egos aren’t far from the imagination. MLS Vet (but relative youngster) Kalif Alhassan is likely to be joined on the bench by United returnee Jamie Watson who found it hard to break into the weaker midfield from 2014. It’s also difficult to see Aaron Pitchkolan starting ahead of Vicentini or Jordan barring injuries and his move to the back line seems likely.

Summing it all up

It’s hard to regard Minnesota United as anything but stronger than they were last year. 2014’s weakest players like Daley, Takada, Reed and Gyorio have all been replaced by either seasoned veterans or exciting newcomers. In fact one could construct two entirely separate 11 man squads from United’s roster that would be competitive in the NASL. While supporters will be sad to see team stalwarts like Pitchkolan or fan favorites like Jamie Watson relegated to the bench, the end result should leave them happy.

With the depth available the club itself will also be disappointed by anything less than a stronger showing both in the league and the US Open Cup. 2014’s away USOC exit to a depleted Sporting KC squad was only topped in disappointment by the stinging NASL semi-final loss at home to an arguably weaker team. Team President Nick Rogers will want to firmly expunge the memory of both games from the popular consciousness and bring home more silverware than 2014 produced.

Coach Manny Lagos will certainly appreciate his ability to experiment as the season goes on. We should expect to see more rotation in 2015 which bodes well for a squad with aging bodies that showed signs of flaming out by the end of 2014 season. Even if the weak defensive line concedes goals, it’s likely Minnesota’s potent attacking force will produce exciting, high-scoring games.

Nachiket Karnik is the co-host of the Two United Fans video podcast hosted on YouTube and TUFcast, an audio podcast focused on the NASL. This article is partially adapted from a conversation between TUF co-host Kyle Schlinz and writer Bill Stenross which will be featured on Two United Fans episode 2×09 which will be released on 4/8/2015.